‘Save our memes’: Protesters take to the streets for Internet freedom

The latest copyright law proposals advanced by the European Commission have met with a backlash from digital rights activists, whose protest against “Internet censorship” are now taking place in several cities in Poland.

The protests, which began on June 29 and are scheduled to end on July 1, are directed against the proposed new EU directive on copyright protection which force online platforms such as YouTube or Facebook to actively filter any content which may violate copyright. Posting links to online content which contain snippets of that content, such as pieces of articles, would also be restricted to protect the rights of publishers whose work was being reproduced without their permission.

Opponents of the new law have gathered in various Polish cities – including in Warsaw, where protesters assembled in front of the European Commission office. They have already nicknamed the new regulations “ACTA 2”, a direct reference to the Anti-Counterfeiting Trade Agreement, an intellectual property rights enforcement treaty which sparked a furious backlash back in 2012, when an estimated 500,000 people took to the streets of various Polish cities and towns to voice their displeasure.

Today’s protests are much more modest in terms of numbers, yet much of the atmosphere of the anti-ACTA struggle remains the same. Protesters chanted slogans such as “Save our memes”, “Stop ACTA 2.0” or “The content of this banner has been blocked”; some of them wore Guy Fawkes masks, adopted as a symbol by the global hacktivist group Anonymous, commonly associated with information freedom movements worldwide. Fawkes was the author of the Gunpowder Plot to blow up the House of Commons in 17th Century England. 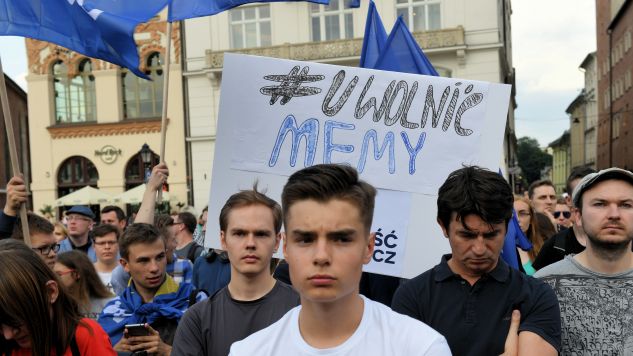 Protesters in the main square in Kraków holding a "Free the memes" banner. Photo: PAP/Jacek Bednarczyk

Poland’s political scene has so far shied away from embracing their struggle, however; so far, only a number of fringe movements or activists have backed their cause, although a few deputies of the Kukiz’15 movement, an anti-establishment group which won 42 seats in Poland’s lower house of parliament in 2015, have also expressed their support.

Meanwhile, in a recent interview, Paweł Lewandowski, secretary of state at Poland’s Culture Ministry, said that Poland would support the directive as long as the originality – and not the length – of the piece of information published would serve as the criterion for applying the new regulations. He also made reassuring statements that Facebook or Twitter users would not be affected and posting links to various sites would still be permitted. He added that the new regulations are mostly intended to curb the practices of illegal dissemination of copyrighted content such as films or videos by websites whose owners make a living by profiting from the work of others.

An expert working for the Polish Chamber of Press Publishers cited by one of Poland’s daily newspapers said that much of the fears surrounding the new regulations is unfounded. Rather than the alleged Internet censorship, the new law would protect content creators against rampaging online piracy, said the expert, adding that creating memes would still be covered by the existing exemptions for parody works. An average user “will never notice” the new regulations, he said, adding that the current protests were largely the result of ignorance and lack of legal knowledge.