Specialists agree: the wreck of a German tanker ship poses an existential danger to the environment of the Baltic Sea, due to fuel still residing in the vessel’s hull.

The fuel may leak into the Gdańsk Bay at any moment, where the ship has been decomposing for 73 years when it was sunk during WWII, experts say. Ecologists have been sounding the alarm for years about the possible leak which might devastate the natural environment, and that draining the fuel is absolutely necessary.

In April 2018, the MARE Foundation, specializing in protection of marine life, found that 1.5 mln liters (nearly 400,000 gallons) of oil is still aboard the vessel. Some oil has already leaked out of the 179-meter-long wreck, damaging the surrounding ecosystem.

The German tanker, sailing by the name “Franken,” is the largest identified wreck in the Gdańsk Bay, and is considered to be a potential threat to marine environment, according to the wreck classification made by the Finnish Environment Institute (SYKE). 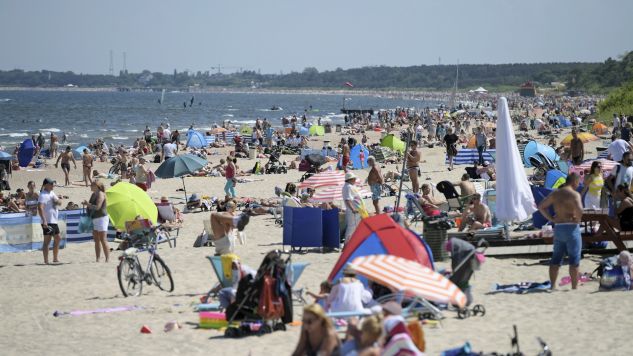 The leak may result in around PLN 500 million loss to the Polish tourist industry, according to specialists. Photo: PAP/Adam Warżawa

According to the MARE website and preliminary analysis of the Maritime Institute in Gdańsk, it is highly probable that, due to progressive corrosion of the hull, the wreck will break in two in the near future, releasing all the remaining oil into the bay – one of Poland’s major tourist areas.

The leakage could threaten the beaches located 10-25 km away from the place where the ship sank.

Moreover, “the Franken shipwreck is located near several marine Natura 2000 sites, nature reserves and colonies of the protected grey seal,” says the MARE website, adding that “the fuel spills on the beaches will have a negative impact on tourism in the entire region.”

“Closures and cleaning of the beaches of the total length of 80 km during the tourist season will have a negative impact on the tourist industry that will be threatened by losses to the tune of hundreds of millions of złoty. It is estimated that the loss of one season could mean around PLN 500 million loss for the northern Polish Pomerania province,” says the MARE website.

The cleaning of the wreck will undoubtedly be very expensive, but the cost will be much lower than the total environmental and financial losses, incurred by Poland in the case of an uncontrolled leakage and contamination of the Gdańsk Bay. Experts estimate that the cleaning costs could cost between EUR 10-20 mln.