Majority of Poles say ‘no’ to Polexit: poll

According to an opinion poll whose results were published on Saturday, over 65 percent of all respondents in Poland oppose the idea of their country leaving the EU, with about 17 percent being of the opposite view. A further 17 percent had no opinion concerning the hypothetical Polexit.

Poland’s deputy PM and science minister Jarosław Gowin said in an interview for one of Poland’s weekly magazines that if the ECJ rules in favor of...

The poll, undertaken by opinion and market research pollster SW Research for Poland’s daily “Rzeczpospolita”, was the direct aftermath of the recent row over the upcoming ECJ ruling on one of the aspects of Poland’s divisive judicial reform. In a recent interview, Poland’s deputy PM hinted that the government may be “forced to ignore” the ruling if it undermines the country’s sovereignty. The opposition was quick to respond that any such move would be akin to taking the first step towards Poland leaving the EU.

The results of the poll show that the vast majority of Poles, while often critical of individual aspects of the EU and the way it functions, would not think to follow in the UKs footsteps to leave the European bloc. In a 2016 referendum, the majority of British voters spoke in favour of breaking away from the EU, with the country expected to complete the transition in March next year. 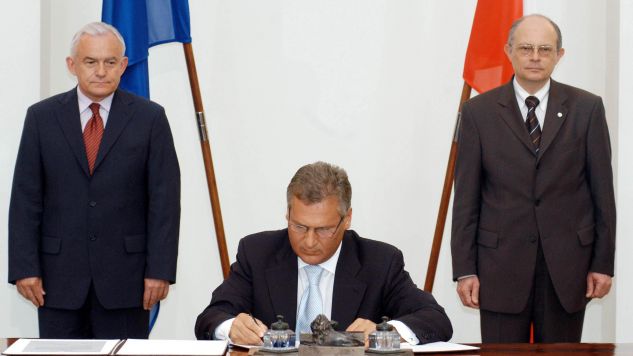 Support for EU membership still high in Poland after 14 years

Poland’s officials have marked the 14-th anniversary of joining the European Union saying it strengthens its international role. EU membership...

An exit nobody wants

According to the available data, the hypothetical Polexit is the least popular among people with a university education with 68 percent of respondents being opposed to the idea compared to 53 percent of those who ended their education after graduating from primary or lower-secondary school.

A political scientist cited by the newspaper considered this fact unsurprising, given that more highly-educated citizens can reap the benefits which freedom of movement and establishment within the EU affords. He also adds that older citizens are likely to speak ill of the Polexit idea since they still remember how difficult it was to travel back when the Iron Curtain was still drawn across Europe.

Another expert quoted in the article adds that Poland continues to exhibit high levels of enthusiasm for the EU compared to other Member States.

When speaking of Polexit, one should bear in mind that the entire concept is more of a hypothetical construct than a real possibility. None of Poland’s major parties has even flirted with the idea of severing ties with the EU, no matter how critical they have been of the decisions being taken in Brussels. Poland’s ruling Law and Justice party may lock horns with the EU over its judicial reform and other issues such as migration, but has always stated that it has no intention of leaving. On the other side of the scales, the liberal opposition largely chooses to follow the EU agenda, including backing Brussels whenever it deigns to castigate the government. Poland currently has no openly Euro-sceptical party represented in parliament and the popularity enjoyed by groups enthusiastic towards a potential Polexit is marginal at best.

In a recent report concerning Poland’s position within the EU, the UK’s “The Telegraph” stated that with its reliance on EU funding, expected to amount to EUR 80 billion between 2014 and 2020, Poland is unlikely to consider hopping off the European omnibus. The report cited a Polish expert who said there is “no political drive whatsoever for Polexit, and no public support for it.”