US President opposed to Nord Stream 2 but no sanctions

The construction of Nord Stream 2 which is to link Russia and Germany and by-pass Poland was discussed at the meeting of the Polish and American Presidents on Tuesday 18 September. The two Presidents were in agreement that the project was a political rather than a business one, but President Trump stopped short of declaring that the US would impose sanctions on companies that participate in it.

“President Trump told me that this project is totally uneconomic for Germany to become so dependent on Russian gas supplies.”

President Duda told President Trump that the project was “dangerous for Europe and Poland as it implied Russian domination of the gas energy market on our continent”. He underlined that there was a need for diversification of gas supplies and the widest possible choice of price offers rather than a monopoly supplier.

The Polish President said that he had conveyed to the American President that diversification of gas supplies for Poland was clearly in the interests of the US as Poland has a gas terminal and the US wants to sell LNG. “If Russian gas dominates in Europe the US will have problems in selling its gas”, he said. 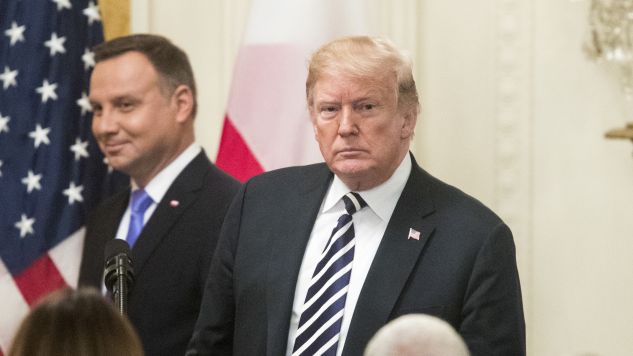 President Trump said there are currently no plans to introduce US sanctions on companies participating in the construction of the Nord Stream 2 pipeline. Photo: PAP/EPA/MICHAEL REYNOLDS

Poland and US call for less energy reliance on Russia

Poland and the United States called for less energy reliance on Russia during the Three Seas Initiative summit in the Romanian capital, Bucharest,...

Sanctions not in the pipeline

Asked, by Polish state radio at the joint press conference, whether the US would impose sanctions on companies participating in the Nord Stream 2 project President Trump said that there were no such plans.

“We are not planning that. We simply feel that it is very unfortunate that Germany is choosing to spend billions of dollars on energy supplies from Russia. Believe me, the German people do not like this”.

The Polish Foreign Minister Jacek Czaputowicz said that he did not feel disappointed by President Trump’s stance. “There was nothing that led us to believe that any such sanctions would be announced here. What is important is the negative view US has of the project” remarked the foreign minister who during a visit to the US in July had said that the Americans were not ruling out sanctions as a means of blocking Nord Stream 2.

The meeting produced a joint declaration and confirmed the good chemistry between the two Presidents. President Trump confirmed his pleasure that Poland was prepared to pay for its defences, including any money that might be needed to seal the deal on a US base in the country.

Poland’s stance on defence and willingness to purchase US weapon systems, together with its readiness to purchase LNG gas from the US is music to President Trump’s ears. It makes him more open to Poland’s ambitions for a US military base.

But on Nord Stream 2, despite the fact that both countries dislike the project as it is against both countries economic interests, President Trump is not ready to impose sanctions. Poland would have preferred that it was otherwise. Without the US being willing to impose sanctions the project will be hard to stop. Poland does not seem to have strong enough cards in its hand to persuade Germany to change course on the issue and the EU is unlikely to be able to force its most powerful member to stop it either.

The spotlight in the next few months will be turned on the deliberation in the US on the nature and scale of military presence in Poland and Europe as a whole. This is not just a bilateral Polish-US matter. It involves the whole of NATO and also US-Russian relations. The issue is firmly on the table but some way from being resolved. It is the geopolitics that will be decisive here rather than any considerations of costs.