The Onet website has published a report on the evidence surrounding the illegal recordings of top politicians and businessmen that shook Polish politics in 2014. The report quotes evidence from the perpetrators of the recordings who allege that the current PM Mateusz Morawiecki, then working for the Bank Zachodni WBK, talked to another businessman about participating in dubious financial dealings.

Mateusz Morawiecki was CEO of the Bank Zachodni WBK between 2007 and 2015. For part of that period, Mr Morawiecki was also a pro-bono member of the Economic Advisory Council to the then-Prime Minister Donald Tusk.

According to Onet.pl, the waiters who illegally recorded conversations between Polish politicians and businessmen testified in 2015 that they had recorded some conversations in which Mateusz Morawiecki participated. According to the testimony, the businessmen were discussing property purchases which were to involve using fictional legal entities in the dealings.

Onet reports that the prosecutors did not follow-up on this thread in the investigations. The whereabouts of the alleged tape are not known.

According to the conversation, Mr Morawiecki had close contacts with members of the Civic Platform (PO) government and had at one stage been tipped to be one of its ministers.

On Tuesday Onet.pl published extracts from the conversation which Newsweek wrote about. It reveals that the future Prime Minister in private conversations used un-parliamentary language and that his views on economics were liberal. It also records him predicting the migration crisis when he talks about the disparities in wealth leading to a potential exodus from Africa.

That conversation is embarrassing for the current Prime Minister only because of the language that was used. There are no hints of any financial wrong-doing or any other form of impropriety.

A series of illicit recordings of conversations involving top government politicians and businessmen that had taken place in 2013-2014 in two exclusive Warsaw restaurants were published by the Polish weekly “Wprost” in June 2014.

The recorded indiscretions shook Polish politics and became the subject of an extensive criminal investigation. One of the tapes revealed that the Interior Minister was asking the head of Poland’s National Bank to loosen monetary policy to help the governing party win electoral support. It also emerged that the Prime Minister and the government had known of the risks involved with the “Amber Gold” shadow bank well in advance of its collapse.

The criminal investigation lead to four arrests, including waiters at the two restaurants and Marek Falenta a businessman involved in trading in coal. All were charged with making illegal recordings. Mr Falenta was sentenced to two and a half years in prison. The waiters were given suspended sentences and fines.

There has been much media speculation since then that the recordings may have been commissioned by political opponents or a foreign power. However, no evidence to confirm any such hypothesis has been found. 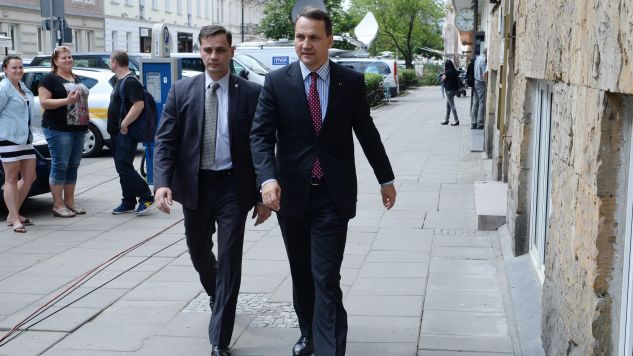 Former foreign minister between 2007-2014 Radosław Sikorski prior to a court hearing on "Waitergate". Photo: PAP/Jacek Turczyk

Poland’s Prime Minister Mateusz Morawiecki was questioned about the matter during an extensive interview he gave to commercial TV “Polsat News”. He brushed off the allegations as yesterday’s news.

“This is information that has been in circulation in Warsaw for three-four years. Available to all journalists. So why have they surfaced right now? It’s not coincidental. We have tread on too many toes.”

According to Poland’s PM, this scandal resurfaces ever so often. “It’s a scandal that involved the Civic Platform,” he said.

“Everyone has the right to testify what they want. But I do not recall any such matters. I don’t think it’s a coincidence that this has emerged right now,” Mr Morawiecki mused. He was referring to the ongoing election campaign.

Beata Mazurek , the spokesperson for the ruling Law and Justice (PiS) challenged the Civic Platform to produce the tapes rather than continue making insinuations. “Put the cards on the table… “If there had been any evidence of our [PiS – ed.] involvement Civic Platform would have used it in the 2015 election campaign,” she said.

Onet.pl is promising more revelations on this matter. But the key is not rumours or reports of individual testimonies. To be credible, the journalists need to produce the recorded tapes.

If they do not produce the tapes but continue to feed speculation in dribs and drabs they will inevitably be accused of engaging in an attack on the ruling party during a sensitive election period.

“Waitergate” was a shock for Polish politics as it showed how politicians and businessmen operating in ways and in language one might better associate with the underworld. It was bound to do the governing party of the day, the Civic Platform, real damage.

Clearly it would not be good for the current Prime Minister to be associated with that scandal. If any tapes do emerge then every word he utters as well as the context of the conversations will be dissected.