Protests in front of Russian embassy after sea clash

Around 100 people gathered in a “Stop the war” demonstration in front of the Russian embassy in Warsaw on Monday.

Krzysztof Szczerski, the Polish President’s chief of staff, said that Sunday’s incident on the Black Sea – where the Russian Navy seized three...

The protest was organised by the Euromaidan-Warsaw social movement. Its leader, Natalia Panczenko, said that participants wanted to “appeal to Poland and to the whole world, to strengthen sanctions against Russia because for now it is the only argument to which Russia might react.”

“We are here not only to show solidarity with our neighbours, our friends in Ukraine, but also to condemn Russia’s behaviour. This place is not coincidental, this is the embassy of the Russian Federation, a country that for many years now continues to destroy freedoms and violate territorial integrity of our neighbour,” said the opposition Civic Platform MP present at the protest

Protesters chanted “Stop the war”, “Free the sailors”, “Keep your hands off Ukraine”, “Solidarity with Ukraine”.

“Jan Karski [Polish World War II resistance soldier] said: ‘who does not condemn actions, condones them’ and I think these words are universal and timeless”, the Civic Platform MP added. 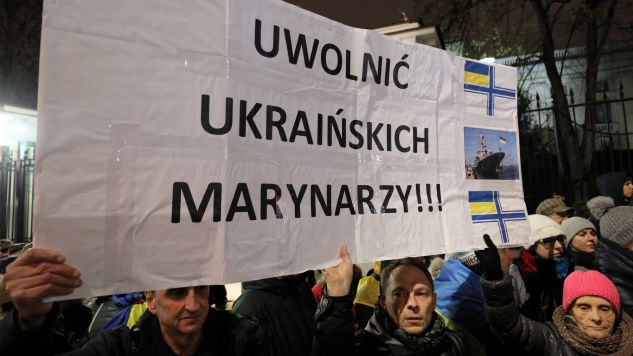 Following the conclusion of the official demonstration, flares in Ukrainian yellow and blue colours were lit and some participants threw bags with colourful substances at the embassy’s fence.

“We have identified individuals who have thrown objects with the substance towards the embassy. We will contact the administrator of the building and we are ready to pursue the course of actions taken”, said the Warsaw Police press office.

On Sunday, Russian opened fire at three Ukrainian naval ships in the Kerch Strait, connecting the Black Sea and the Azov Sea, off the coast of Russia-annexed Crimea. It subsequently seized them together with the 24 crew members. Russia claims they violated its border and entered its territorial waters. In response, Ukrainian President Petro Poroshenko introduced martial law for the period of 30 days. 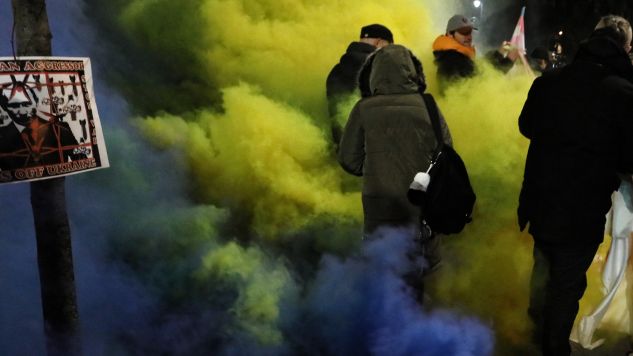 Following the conclusion of the official demonstration, flares in Ukrainian yellow and blue colours were lit by some protesters. Photo: PAP/Paweł Supernak
source: IAR