Driven by the Marxist revolutionary idea, having triumphed in Russia, the Bolsheviks sought to bring “liberation” to the peasant-worker masses of the West, hoping to conquer the newly established Baltic States and march with guns and bayonets over the “corpse of Poland” towards Western Europe.

“In these circumstances, [marshal] Józef Piłsudski attempted to negotiate with [the newly established Baltic States of Latvia, Estonia and Finland], who could feel threatened… by potential Soviet aggression,” one of the most prominent Polish historians, Andrzej Nowak, told Polish Radio.

The Bolsheviks invaded the Baltic States in 1918 and continued their offensive in 1919. Those attacks, however, were repelled by Latvia and Estonia, the former with the support of German troops, the latter with the UK’s support.

With Kārlis Ulmanis as Latvia’s leader, the state welcomed Józef Piłsudski’s invitation to a common fight against the Red Threat. Latvia found itself in a dire situation as its eastern province of Latgale had already been occupied by the Soviets, whereas the southern regions fell into the hands of the anti-communist White Guardsmen under the command of Pavel Bermondt-Avalov allied with Latvian Germans.

Boosted with Polish ammunition and supported by British warships, Ulmanis’ troops defeated Bermondt-Avlov, curtailing his plan to establish a new state of Western Russia over Latvian territory. The success resulted in the signing of a Polish-Latvian military alliance and plans for operation “Winter” which aimed to drive the Bolsheviks out of Latvia.

The alliance obliged Poland to cede Latgale, a territory that used to belong to Poland before the 1772 partition and was still inhabited by many Poles in 1919/1920, to Latvia once the province was recaptured. For Poland, however, the priority was to stop the Soviets dead in their tracks, for fear that the Lithuanian government in Kaunas would let the Red Army march through Lithuania.

“The Polish-Lithuanian conflict was very fierce. Lithuania was ready to ally with the devil, to retrieve the Vilnius region captured by Poles,” said Mr Nowak. 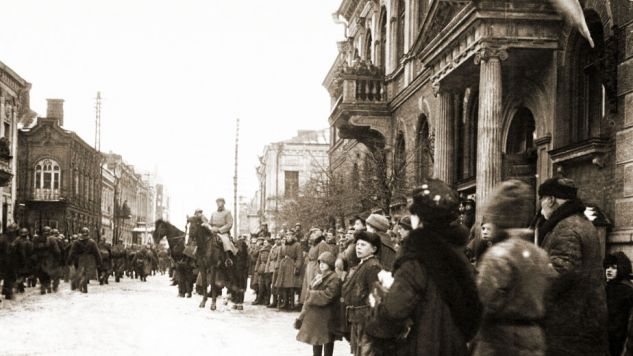 The city of Daugavpils liberated from the Reds by the Polish-Latvian army. Photo: Wikimedia Commons

Driving the Soviets out of Latvia

A veteran of battles against the Bolsheviks, General Edward Rydz-Śmigły was in command of a Polish-Latvian 40,000 men strong army comprised of 30,000 Polish soldiers and 10,000 Latvian troopers. They crossed the frozen Daugava River on January 3, 1920, and continued towards Daugavpils.

In temperatures of −25 °C (−13 °F), strengthened by French FT tanks commanded by the French capt. Jean Dufour, the Polish forces attacked the Daugavpils fortress from two sides, forcing the Reds to retreat west-ward, right into the Latvian forces, to whom they surrendered.

The rest of the campaign was a steady walk towards victory. The Soviets were defeated within a week, Latvians secured their independence until 1940 and Poles had their border with Soviet Russia shortened.