Talking to private broadcaster TVN24, the Minister called the recent media reports about the government plan to kill most of the Polish wild boar population, including the killing of pregnant and young animals, a misunderstanding.

“The agriculture minister appealed for a more drastic reduction,” the minister said, “but it won’t be possible.”

“The President has been apprised of the situation and after receiving all the information, he had no reservations about the plan,” Mr Kowalczyk added.

According to the minister, at the end of the hunting season in March, around 250,000 boars should be left in Poland. Since last April year, 168,000 boars have been culled and another 17,000 are to be killed by the end of March.

Mr Kowalczyk thus contradicted the widespread news of the government’s plan to carry out a mass slaughter of wild boars.

The news of the government’s plan to fight the spread of African Swine Fever by culling wild boars emerged early this month. The action is to take place on three weekends, starting January 12.

In a letter to the Polish hunting associations, the Deputy Ministry of Environment appealed to the hunters to “maximally decrease the population of wild boars” in order to fight the spread of the ASF.

The news has generated a heated debate in Poland concerning the effectiveness and ethics of the slaughter. 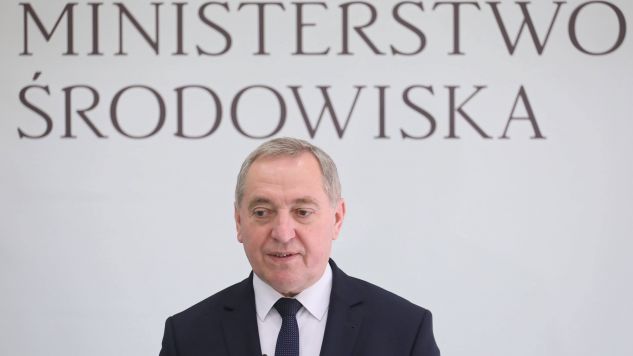 Minister Kowalczyk said that the government does not plan mass extermination of boars. Photo: PAP/Paweł Supernak

The idea of a mass killing of wild boars divided the Polish society, scientists, as well as hunters themselves.

Firstly, the effectiveness of the culling in terms of stopping the spread of the disease is being questioned.

The ASF often emerges on farms which have not been properly secured and thus allowed boars and pigs to come into contact. As the cost of biosecurity is high, many small farms do not meet the required standards. Due to low pork prices, small farmers argue that pig farming would prove unprofitable if they did so. Thus, it is not the boar which is the source of the problem but the people who do not comply with security requirements and therefore there lies the problem that needs to be tackled.

As former environment minister Jan Szyszko indicated, “carriers of ASF are not only boars but also humans, birds, foxes, wolves.” The Chief Veterinary Inspector also indicated that humans play a predominant role in the spread of the disease.

Many also indicated that mass culling may bring the opposite effect. “The more we hunt boars in Poland, the more will migrate from Poland’s eastern border,” said professor Andrzej Elżanowski of the University of Warsaw. As the ASF is also present among wild boars there, the consequence of the culling would be the death of tens of thousands of animals but not the eradication of the disease in Poland.

Secondly, the directive to cull a large proportion of the boar population, including sows and piglets, sparked a debate on the ethics of such action.

The news of the planned mass culling is opposed by many Poles. A protest against the slaughter took place in front of the Parliament, while over 330,000 people signed an online petition to stop the action. 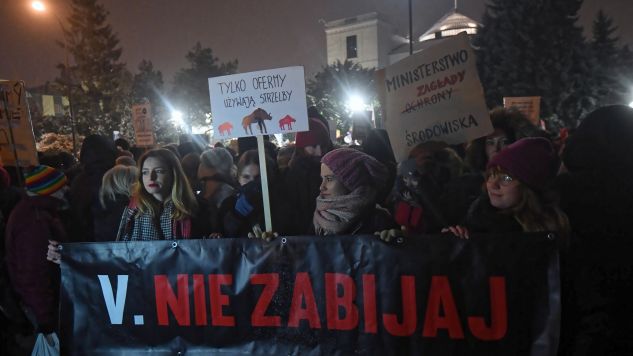 Moreover, slaughtering the animals taking care of the young or right before they give birth runs contrary to the hunters’ code. However, according to the information released, the Environment Ministry offered double financial rewards for a sow compared to a male boar. The hunting circles were deeply concerned about the government’s directive.

In a statement published on Wednesday, they have expressed their “strong disapprovement of the directive to shoot pregnant animals and those taking care of piglets.”

They also indicated the need to fight the disease while emphasising that the population of wild boars is of major importance for maintaining a balance in the ecosystem.

Despite the minister’s assurances, the number of animals to be killed is not quite clear yet.

The statement of the hunting union reiterated the minister’s claim that the number refers to the entire hunting season between April 2018 and March 2019, and 90 percent of the animals required have already been killed.

However, the minister of agriculture may push for an increase of that number which the letter to the hunting union indicates. The government is also likely to fight for the support of farmers who are directly impacted by the ASF. Thus, the decision about the reduction of the boar population might also be influenced politically.

What is the ASF?

The African Swine Fever (ASF) is an infectious fever that has a mortality rate of over 90 per cent in pigs yet is not harmful to people. Transmission of the disease occurs either directly between sick and healthy animals, or indirectly through contaminated feed, or on contaminated clothing, vehicles or other fomites.

It has spread throughout Europe and Asia last year but has not yet been detected in North America.