On April 3, 1940, the Soviet Union started the mass murder of the Polish officers held in camps in Kozelsk, Ostashkov and Starobelsk, located in today’s Russia and Ukraine.

After the Soviet invasion of Poland in September 1939, around 250,000 Polish prisoners, including more than 10,000 officers, had been taken captive. Lavrentiy Beria, the head of the Soviet secret police NKVD, created the Main Administration for Affairs of Prisoners of War and Internees, to manage Polish prisoners.

In October of that year, the Soviet authorities decided to create the camps for prisoners. Those in Kozelsk and Starobelsk were destined for military officers, while the one in Ostashkov – for officers of the police, Border Protection Corps and the prison service.

In early 1940, more than 6,000 officers of the Police and other services plus 8,376 military officers were held in the camps. Among them, there were many reserve officers, who were members of the intelligentsia, called to arms when WWII started in September 1939.

The decision to murder them was made by the highest Soviet authorities. On March 5, 1940, six members of the Soviet Politburo: Joseph Stalin, Vyacheslav Molotov, Lazar Kaganovich, Kliment Voroshilov, Anastas Mikoyan, and Mikhail Kalinin, signed an order to execute more than 20,000 of Polish prisoners, held captive in different parts of the Soviet Union.

A total of 4,404 people were transported from the camp in Kozelsk to a forest near the town of Katyn and then executed by a shot to the back of the head. The Soviets also murdered 3,896 prisoners from Starobelsk in NKVD chambers in Kharkov, 6,287 of them were shot in Kalinin (today known as Tver).

Moreover, the decision from March 5, 1940, sentenced to death more than 7,000 Poles held in other places in Soviet Ukraine and Belarus. 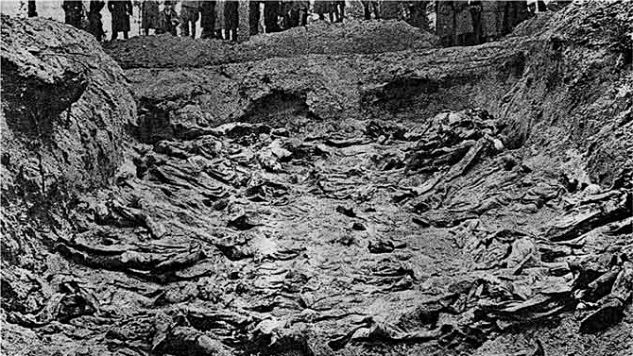 One of mass graves in Katyn, 1943. Photo: Public Domain

The mass graves of Polish officers were discovered in 1943 by Nazi Germany after The Third Reich had invaded the Soviet Union. Moscow responded that “Polish prisoners were working on construction sites near Smolensk and in summer 1941 they were murdered by “German fascists” after the Soviet forces had withdrawn from that area.”

The Polish government-in-exile applied to the International Red Cross to create a committee to explain the mass murder of the Polish officers. The Soviets were outraged by such proposal and accused Poles of collaboration with Nazi Germany.

In late April 1943, the Soviet Union broke diplomatic relations with Poland. Stalin decided to create his own puppet government to take control over Poland. Western Allies did not support the Polish government-in-exile on this issue, because they needed Stalin’s help in fighting Nazi Germany.

The truth about the Katyn Massacre was revealed in 1990, when Boris Yeltsin, the then President of the Russian Soviet Federative Socialist Republic and a future President of Russian Federation, released top-secret documents about this issue and handed them over to the new Polish president Lech Wałęsa.