China’s ambassador to Poland Liu Guangyuan told Poland’s “Rzeczpospolita” daily that if Poland was to expel the Chinese Huawei telecommunication company, the introduction of 5G technology would be delayed by two or three years.

Piotr D. (name withheld under the Polish privacy law), who was detained by Polish Internal Security Agency (ABW) in early January under the charge...

Poland is considering excluding Chinese Huawei from the IT market in the country. This is in the aftermath of the detention of a Polish citizen and a Chinese businessman, who worked for Huawei, on the suspicion of spying for Chinese secret services earlier this year. The final decision on the matter has not yet been made.

Mr Guangyuan stressed that Huawei has existed for 30 years, been present on the Polish market for 15 years and that there were no concerns regarding its functioning during that time.

In his opinion, Huawei enjoys high popularity and appreciation by Polish society. Ambassador Guangyuan also believes that Huawei has contributed to the development of Poland’s telecommunication sector.

“States that discriminate Chinese companies under the pretext of concern for security have not provided any evidence [that Huawei has violated consumers’ data security - ed.],” said Ambassador Guangyuan, adding that competition between enterprises is something natural, however, he deemed top-down banning of companies immoral.

The ambassador also deflected claims that Chinese law requires companies to share their clients’ data with the Chinese government, saying that it is quite the opposite as in his country firms are obliged to operate according to the provisions of international and local law. According to the ambassador, it is precisely for this reason that more and more companies sign 5G network construction contracts with Huawei. He added that the security issues are connected to technology and that they should be solved in a technological way. 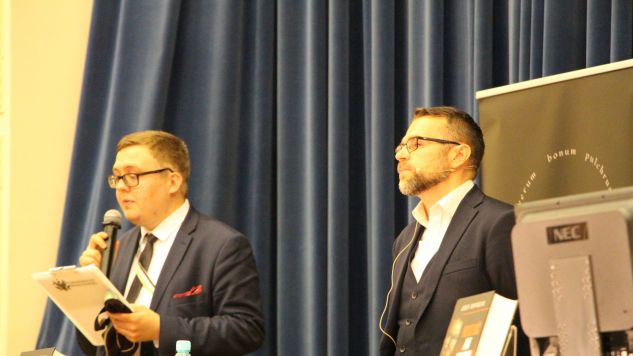 Jacek Bartosiak (R) said that the ban on Huawei influences the political situation in Europe and Poland. Photo: K! Sarmatia

‘Huawei could be excluded from Polish IT market’: official

A Polish law enforcement agency detained a Pole and a Huawei employee on the suspicion of spying for Chinese secret services.

US to limit freedom of communication: geostrategist

During a Saturday lecture at Warsaw University co-organised by the Academic Fraternity “Sarmatia”, renowned Polish geostrategist Jacek Bartosiak said that the world is entering a communication revolution in which the key element is the 5G network.

Mr Bartosiak also expressed his opinion that US-China rivalry will limit freedom of communication, citing Google’s ban that would restrict Huawei’s use of Google apps, including the Google operating system Android. The geostrategist said that the ban influences the [political] situation in Europe and Poland.

Huawei filed a motion for summary judgment in its lawsuit against the U.S. government, in the telecoms equipment maker’s latest bid to fight sanctions from Washington that threaten to push it out of global markets.