Just hours ahead of President Andrzej Duda’s visit to the White House the Foreign Policy magazine has published an article arguing that Congress should stop the US President from sending more US troops to Poland.

The article “Duda’s ego trip” by Melissa Hooper pays a backhanded compliment to the Polish President Andrzej Duda it calls him “the savviest of all Trump’s ego massage therapists. It is because “ in a visit to the Oval Office last year, he pushed for a US military base in his country, promising to name it ‘Fort Trump’. And there’s nothing Trump likes more than seeing his name on things.”

Ms Hooper argues that the move to put more US troops on Polish soil “makes no sense regardless of one’s stance on the proper US posture toward Russia. For those who believe in conciliation, bulking up the US military presence on Russia’s borders is needlessly provocative. If you believe the United States needs a larger deterrent against prospective Russia aggression, though, adding 1,000 or so troops to the 4,000 already there will do nothing. The move is both too much and not enough.”

But is the politics of the issue which is foremost in the mind of the author of the Foreign Policy article. She argues that “Poland’s creeping authoritarianism” has received little attention, unlike that of Hungary’s and that President Duda’s hostility towards Russia is the reason.

There are factual errors in the text. It alleges that there has been a purge among military leaders in Poland when the only evidence cited is the resignation of General Mieczysław Gocul. Next comes something Mr Duda’s lawyers may have to be involved in.

“The Duda administration has mounted investigations and prosecutions against independent media. This includes an investigation of TVN24, a US-owned outlet, because it reported a celebration of Adolf Hitler’s birthday in which a staff member of right-wing party participated.” 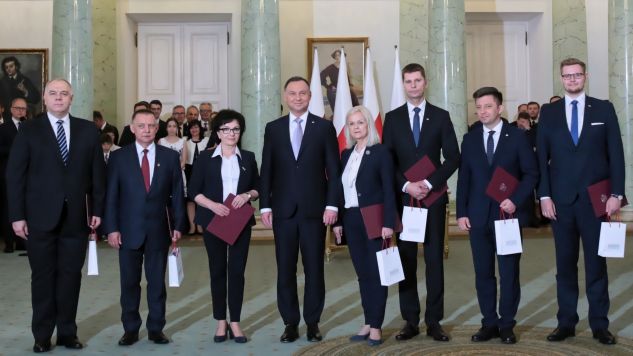 The "Foreign Policy" claims that the Polish government is autoritharian. Photo: PAP/Leszek Szymański

Ms Hooper next argues that Poland is weakening NATO by being like Russia.

“Beyond the damage to Poland’s democracy, Law and Justice’s abuses may also undermine NATO. It is difficult to mount an effective political campaign against Russian authoritarianism when one of its most important frontline opponents is similarly repressive… U.S. military support for Poland is a green light for further abuse. “

The facts are that Poland is one of the few NATO states that spend the recommended two percent of GDP on defence. Furthermore, it has been active in combating Russia and supporting the security of Batlic states, whose democracies hopefully the author of the article is not questioning.

The author turns to advocating that the US intervenes with its soft power in Poland.

“On the occasion of Duda’s visit, Congress should reintroduce funding to support democratic institutions in Central Europe and include Poland as a target country for funding to combat authoritarian influence…To reinvigorate Polish democracy, the US government should support independent media, anti-corruption watchdog groups, and organizations that serve religious and ethnic minorities—all of which are starved for funding.”

The US ambassador has been forthright in defending independent media and the Polish government has got the message. It is not introducing any legislation on media ownership. Anti-corruption groups in Poland exist. But it is curious which religious and ethnic minorities the author feels are starved of funds in Poland. She does not specify and it is hard to name significant groups of that nature that are not well catered for (German minority and the Jewish community are well funded).

It is sometimes interesting to note issues that authors of articles do not mention. These are Russian aggression in Ukraine and Russian attempts to dominate European energy markets. This means that take away one small reference to Russian authoritarianism, and the article would not be out of place on the RT website.