World leaders descended on Piłsudski Square in the heart of Warsaw to commemorate the outbreak of WWII on Sunday.

The central ceremony took place by the Tomb of the Unknown Soldier whose commemorative plaques list all the battles in which Poles fought protecting their homeland.

In his speech, President Duda stressed that “genocides and ethnic cleansing still occur. This is why we remember, so that such horrific events, such terrible suffering, such bestiality, never happen again.”

“America never forgot about a free and independent Polish nation and never will,” Mr Pence said. “It is difficult for any of us who are not Poles to fathom the horrors that began 80 years ago on September 1, 1939.”

President Andrzej Duda and all of the delegates rang the “Remembrance and Warning” Bell. 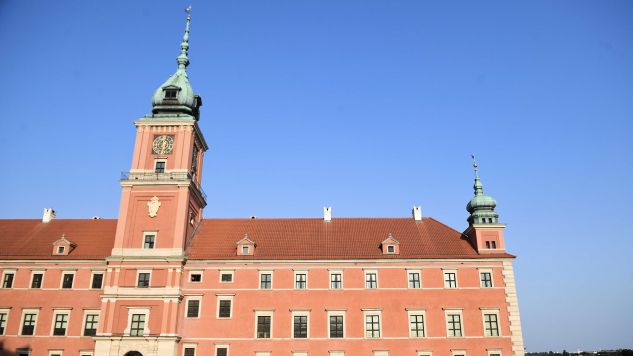 The Royal Castle in Warsaw where the official dinner took place was entirely destroyed during WWII and thus became the symbol of Polish WWII losses and the rebirth of Warsaw. Photo: PAP/Radek Pietruszka

Our principal is cooperation over domination: Polish President

Following the central commemoration of the outbreak of WWII, the delegation heads took part in an official dinner held by Poland’s President Andrzej Duda at the Royal Castle in Warsaw.

“Today, in this place in Warsaw, a city that witnessed horrific cruelty, we stand together to commemorate the victims of WWII,” said President Duda, adding that “we do not stand in mourning in the full sense of the word. We stand in victory – a victory that stems not only from the defeat of an enemy but from the awareness that we form a community of states whose principal is cooperation over the pursuit of domination.”

“Peaceful coexistence of nations is the only way to development and the urge to dominate and rule over others leads to destruction and tragedy,” said Poland’s President, adding that “solidarity in the face of a hostile attack is the foundation of neighbourly and global security.”

Later on Sunday evening President Duda, the First Lady Agata Kornhauser-Duda and the heads of foreign delegations will take part in the “Polish Requiem” concert organised to commemorate the 80th anniversary of the outbreak of WWII. The famous Polish composer and conductor Krzysztof Penderecki will be conducting. The event will take place at the Grand Theatre in Warsaw.