Roman Polański does not give up on leaving critics and movie-lovers speechless and the standing applause that his latest drama film “An Officer and a Spy” received at the Venice International Film Festival confirms this.

Delving into the affair of French Jewish-born Captain Alfred Dreyfus intentionally and wrongly accused of divulging confidential information to the German Embassy in Paris – a scandal of an anti-Semitic hue that polarised French society for years, Mr Polański’s movie found itself on the lips of critics as one of the contenders to the Golden Lion Award.

“It is virtually impossible for this movie not to receive any award, including the Golden Lion,” wrote the Italian press agency Ansa.

According to Gutek Film, which will be the movie’s distributor in Poland, “An Officer and a Spy” is currently the best-rated title of this year’s Venice Festival with its average score topping that of Todd Philips’ “Joker”.

“An Officer and a Spy, adapted from the novel by Robert Harris, paints a subtly devastating portrait of the French general staff, with a stench of establishment sulphur that recalls Chinatown. It’s a solid, well-crafted piece of professional carpentry, like a heavy piece of Victorian furniture; built to last; built to be used. The longer you look at it, the more impressive it grows,” The Guardian wrote, rating the film four out of five stars.

For its part, the Standard showered the movie with four out of five stars, calling it “an absolute master class in how to make a historical film.”

Starring in Mr Romański’s movie are Jean Dujardin, Louis Garrel and Emmanuelle Seigner. The cinematographer is Paweł Edelman. The movie will premiere in Polish cinemas on December 27, 2019.

The Polish-French movie director's film has two major rivals to face off before the grand finale, namely the much-anticipated portrait of a comedian-gone-nuts Todd Philips’ “Joker” and Steven Soderbergh’s “The Laundromat” that casts light on the “Panama Papers” – the tax scandal that shook the world late in the summer of 2016. 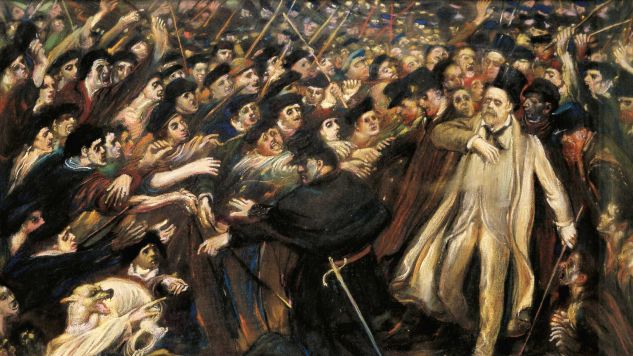 A glimpse at the Dreyfus affair

The scandal began in December 1894 when Captain Alfred Dreyfus was convicted of treason. Dreyfus was a 35-year-old Alsatian French artillery officer of Jewish descent. He was sentenced to life imprisonment for allegedly communicating French military secrets to the German Embassy in Paris, and was imprisoned on Devil's Island in French Guiana, where he spent nearly five years.

It was not until 1896 that evidence came to light that identified a French Army major named Ferdinand Walsin Esterhazy as the real culprit. With high-ranking military officials’ intervention, a military court unanimously acquitted Esterhazy and additional charges against Dreyfus based on forged documents were made. Subsequently, Emile Zola's open letter J'Accuse…!, stoked a growing movement of support for Dreyfus, putting pressure on the government to reopen the case.

Having been returned to France in 1899, he was pardoned, released, exonerated in 1906 and reinstated as a major in the French Army. He served during the whole of World War I, ending his service with the rank of lieutenant-colonel. He died in 1935.