Eight bodies were found in the rubble of a three-storey building in the ski resort of Szczyrk in southern Poland that collapsed on Wednesday as a result of a big gas explosion.

Fire brigade chief Jacek Kleszczewski said at 8 am, Thursday, that a fifth body, belonging to a child, was found. At 8 am, the death toll amounted to 3 adults and 2 children.

He also added that the firefighters removing the debris managed to reach the ground level of the building.

The firefighter also said that search dogs could not have been led over to the debris in order to help to search for the victims because of the hot, smouldering pieces of the building.

“Four bodies were found in the debris following the gas explosion in a single-family house in Szczyrk,” said Silesia provincial governor Jarosław Wieczorek, adding that it was still possible that as many as 8 people had been present in the building when the disaster occurred.

The governor stressed that the rescue mission would be continued.

It was also Mr Wieczorek who reported shortly after midnight on Thursday that the first two bodies, namely of a child and an adult, were found among the rubble. Another two bodies were discovered early on Thursday morning, possibly adults.

“The rescue mission is carried out in very difficult conditions,” said the provincial governor in the early morning hours, adding that “the weather and smoke impair the rescue operations. Most of the work is done manually in a very precise manner so that whoever, if anyone, remains under the debris is not hurt. That is why heavy-duty machinery cannot be used.”

Mr Wieczorek said that “over 100 people” have been taking part in the rescue mission. Meanwhile, a police representative said that 100 firefighters and around 50 police officers joined forces to rescue whoever remains under the bricks and pieces of the exploded building. 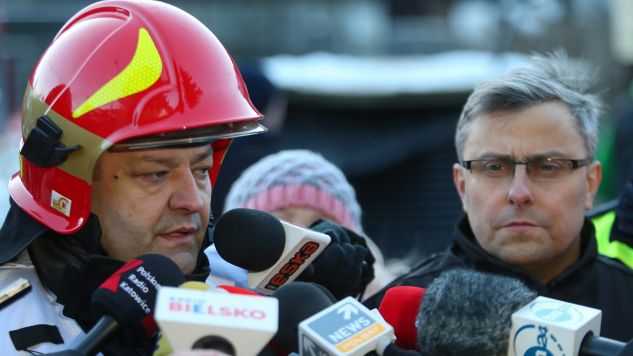 Fire brigade chief Jacek Kleszczewski said that the firefighters have been taking turns depending on their level of fatigue.

For his part, Poland’s PM Mateusz Morawiecki tweeted that “all available forces are engaged in saving human lives and health following the explosion in Szczyrk. I am in constant contact with governor Wieczorek present on the scene of the disaster. My thoughts are with the victims’ relatives. Everyone will be provided with help.”

The explosion occurred around 19:00 local time. According to the spokesman of the Polish Gas Company PSG, the pipeline providing most of the city with gas was drilled through by an external company which had been hired for ground works. The accidental drill-through probably caused sparks igniting the gas which was followed by a powerful explosion.