The 21-year-old Polish striker has put in some promising performances in the first half of the 2019/2020 season of Poland’s PKO BP Ekstraklasa (the top tier. Klimala scored seven times in 17 appearances and recorded three assists.

The new Celtic player has signed a relatively lengthy, four-and-a-half-year contract with the club from Glasgow.

The Polish striker has already greeted the fans of his new club. He tweeted that he cannot wait for his first game in the club's famous green and white hooped shirts.

Hi, @CelticFC fans! �� I'm very happy and proud to be here. I can't wait for the first match in new colors! �� Thanks to my former club @Jagiellonia1920 for everything. Let's get rocking, #CelticFC! �� pic.twitter.com/lbf2bkY9Y4

However, Scottish league experts have suggested that Klimala may not be an automatic first-team choice. His main competitor will be French forward Odsonne Edouard. On the other hand, it is speculated that Edouard may soon leave Glasgow, which would potentially offer a greater opportunity to the Polish player.

Klimala was among the best Polish-born goalscorers this season, along with Adam Buksa of Pogoń Szczecin and Jarosław Niezgoda of Legia Warsaw. It is likely that neither of them will participate in the second half of the Polish league. Buksa has already joined New England Revolution in the American Major League Soccer, while Niezgoda has been linked with Portland Timbers (also in MLS).

The Polish striker is also an important part of the Polish Under-21 national team, where he has particularly caught the eye. In five autumn matches of the qualifications for Euro U-21, he scored two goals and has been a consistent first team member. 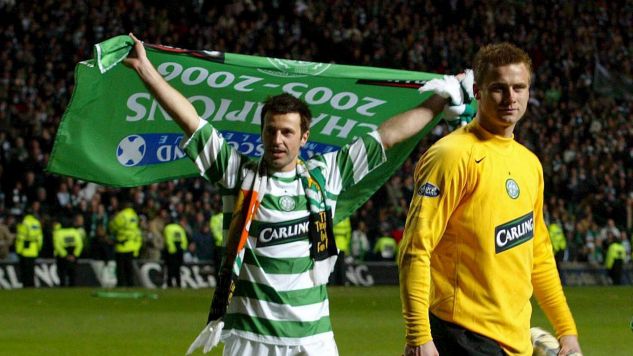 “Holy Goalie” and others

Patryk Klimala continues a rich tradition of Polish players representing the Scottish champions. The most recognised figure was goalkeeper Artur Boruc, who received a nickname “Holy Goalie” from the fans, not only for his good performance on the pitch but for expressing his Roman-Catholic faith during the traditional Old Firm Derby against Rangers FC, whose fans are traditionally protestant, whereas Celtic fans tend to be represented by Catholics. Boruc played in Glasgow between 2005-2010.

During the same period, the striker Maciej Żurawski played for the club. Over a three year stay at Celtic, he played 55 times and scored 22 goals.

In 2009, another Polish goalkeeper, Łukasz Załuska, joined the club playing at Celtic Park. He was expected to become Boruc’s successor, but for many years he remained a reserve. He left the club in 2015.

In the latter half of the 20th century, two other Polish players played for Celtic. Defender Dariusz Wdowczyk was an important part of the clubs defensive line, while Dariusz Dziekanowski was a striker of whom big things were expected, recorded 10 goals in 48 matches over three seasons.

The first Pole to play at Celtic Park was Konrad Kapler, a Polish soldier who settled in Glasgow after WWII. He was a player of Celtic in years 1947-1949, but recorded only eight appearances and did not score a goal.