Lower House in favour of postal voting in presidential elections

Sejm, the Lower House of the Polish parliament passed the legislation allowing for the 2020 presidential election to be conducted by postal voting only, because of the pandemic of the SARS-CoV-2 coronavirus causing the COVID-19 disease.

Ruling party determined to proceed with election in May

The new proposal was submitted to the parliament following the earlier decision of Sejm to dismiss a similar draft, when 228 MPs voted for it, but 228 were against and two abstained. An MP of ruling Law and Justice (PiS) claimed that he tried to vote with his device (due to the epidemic majority of them vote remotely on their mobile devices) but the system did not include his vote. Another one, who voted against claimed that it was his mistake.

After the five-hour break, the parliament voted for including the new point in the agenda, which was the proposed draft. The discussion was fervent, the opposition claimed that the ruling party is only focused on power and conducting postal elections is not safe enough during the epidemic. PiS was also accused of not securing the secrecy of ballots, as postal voting will be managed mostly by state-controlled postal operator. MPs recalled the opinion of Law and Justice politicians who some years ago were clearly against voting by mail. The opposition politicians also called for imposing the state of a natural disaster which, among other consequences, will force the authorities to postpone the elections scheduled for May 10.

The ruling party stressed that the situation of the pandemic of the SARS-CoV-2 coronavirus requires special measures and this is why postal voting is the best way to conduct the presidential elections under current circumstances. They pointed out that imposing the state of the natural disaster only to postpone the ballot is a violation of the constitution. MPs of PiS also referred to the recent postal elections in the Bavaria state of Germany.

The pace was quick and after a few hours, the final vote on the draft took place. A total of 230 MPs voted in favour of the new legislation, 226 were against, two abstained and two did not partake in the voting.

Now the legislation will be now submitted to the Senate, the Upper House. It has 30 days to deal with the legislation and it is expected that it will delay it as long as possible because the opposition has the majority in the house, so it might be discussed in early May, just days before the originally-scheduled date of elections. If the Senate says “no”, the draft will return to Sejm, which can dismiss the Upper House’s decision. 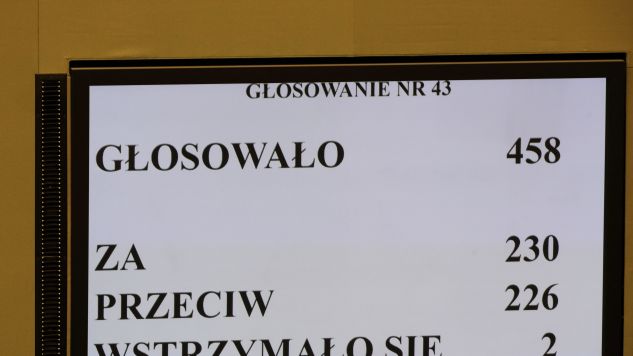