On the 110th anniversary of her demise, The Union of Poles in Belarus (ZPB), unrecognised by the Belarussian government, laid flowers at the foot of a memorial to Eliza Orzeszkowa, a Polish novelist, Nobel Prize nominee and a key figure in the pantheon of Polish and Belarussian national heroes and heroines.

„The Belarussian Poles have not forgotten about Orzeszkowa,” the head of the ZPB Andżelika Borys told Belsat, adding that “to commemorate the [110th] anniversary [of her passing away] we have organised a virtual tour that takes the participants to the places associated with her life.”

Ms Borys added that online sightseeing was organised by Andrzej Poczobut, a Grodno-based Belarusian and Polish journalist and activist of the Polish minority, and Irena Ejsmont, a Polish activist.

“The tour is still available on Facebook,” the head of ZPB said. 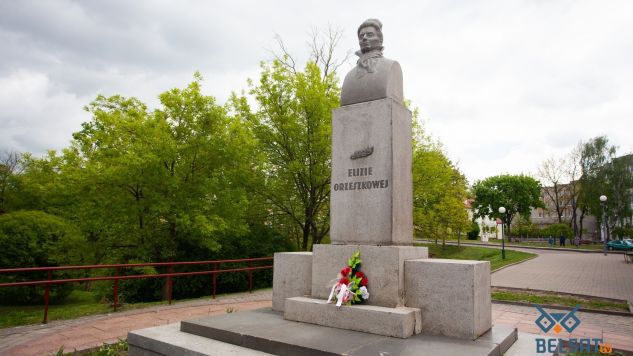 'If the inhabitants of Grodno recognise Eliza Orzeszkowa today, it is thanks to the memorials, streets, statues and the Museum House where the district library is now located,' Belsat wrote. Photo: Belsat

The ZPB action seems all the more valuable in view of the reportedly poor presence of Eliza Orzeszkowa in the awareness of not just the citizens of Grodno, but also Polish visitors from abroad. It is not for nothing that Polish-Belarusian broadcaster Belsat calls Orzeszkowa “a forgotten heroine.”

“If the inhabitants of Grodno recognise Eliza Orzeszkowa today, it is thanks to the memorials, streets, statues and the Museum House where the district library is now located,” Belsat wrote.

“It is hard to imagine that over a century ago she was a symbol of democracy, nobility and helpfulness,” Belsat reported.

Born in 1841 in the suburban Grodno town of Milkovshchizna to a wealthy landowning noble family, from her very earliest years Emilia Orzeszkowa, nee Pawłowska, was immersed in an intellectual atmosphere cultivated by her lawyer father Benedykt Pawłowski. Ever since he passed away when she was just a three, her upbringing rested entirely on her female family members’ shoulders.

Pursuing her education, she moved to Warsaw in 1852 together with her grandmother. This is where she became friends with another iconic Polish female writer Maria Konopnicka. After returning to Milkovshchizna in 1857, at the age of 17, Eliza married Piotr Orzeszko in 1858, a Polish nobleman twice her age. The initial relations between Eliza and Piotr were amicable, however, with the passage of time he became irritated by his wife’s keen interest in the life of the peasantry, its folklore and with her establishing a village school, a positivist fascination he eschewed.

In 1863 the Polish January Uprising against Tsarist Russia erupted, a conflict in which Eliza Orzeszkowa took part helping the insurgents and the uprising’s leader Romuald Traugutt. These insurgent experiences formed the basis for her future novella entitled “Gloria Victis” – now part of the curriculum for Polish pupils.

Following the uprising, her husband Piotr was exiled to Siberia. They were legally separated in 1869, the same year she settled in Grodno for the next 40 years. From then on she became a prolific writer, producing books such as “Nad Niemnem” (“On the Niemen” translated into English by Michelle Granas in 2014), which is a Positivist novel presenting the Polish society and its own internal dynamics as they were in mid–19th century, following the January Uprising against the Russian occupation.

Her writing career reached its pinnacle in 1904 when, together with another Polish writer Henryk Sienkiewicz and the legendary Leo Tolstoy, she was nominated for the Nobel Prize in Literature. However, it was Sienkiewicz who emerged from the competition victorious, albeit the jury was not unanimous, with one of its members stating that “although it is the beating of a noble Polish heart that resounds in the texts of Sienkiewicz, it is a heart of a human being that beats in the creations of Orzeszkowa.”

As a result of severe heart disease, the Polish female novelist died in Grodno on May 18, 1910.