Although this year the pandemic prevented knights from descending on the fields of Grunwald to enter the fray as they used to do for decades, they will return, once the coronavirus is defeated, to reenact the battle that was of key importance in Polish history.

On Saturday, crowds gathered in the fields near the village of Grunwald, north-eastern Poland, to witness the annual reenactment of the great...

“Out of concern for the public security of the Warmińsko-Mazurskie province citizens and guests visiting our region, taking the coronavirus threat into account, we regret to inform that we have taken a difficult, yet the sole responsible, decision to cancel the Grunwald Days and the reenactment of the battle,” Warmińsko-Mazurskie Provincial Marshall Gustaw Marek Brzezin, the National Centre of Culture (NCK) and other organisers wrote.

“We feel even more saddened by the fact that this year’s edition was supposed to be unique given the round 610th anniversary of the memorable battle. However, the security and good health of Poles, tourists, and both Polish and foreign reenactors is of paramount concern to us,” the statement reads.

Even though the organisers sounded the tactical retreat, it was only to let the combatants fight another day.

“We firmly believe that we will all see each other next year, all the more thirsty of the clatter of armour and of the marvellous lesson in patriotism that we have been enjoying in this historic place for the past 23 years,” the organisers wrote.

Last year over 1,000 participants took part in an hour-long reenactment held on Saturday July 13, with some 30,000 spectators gasping in awe at the stands and the plain of Grunwald, northeastern Poland.

Reenactors from all over Poland, as well as from Lithuania, Germany, Hungary, Ukraine, even South Africa, and Russia descend yearly on the meadows of Grunwald to replay the battle held in 1410 between the armies of Poland and Lithuania on one side, and the Teutonic Order on the other. 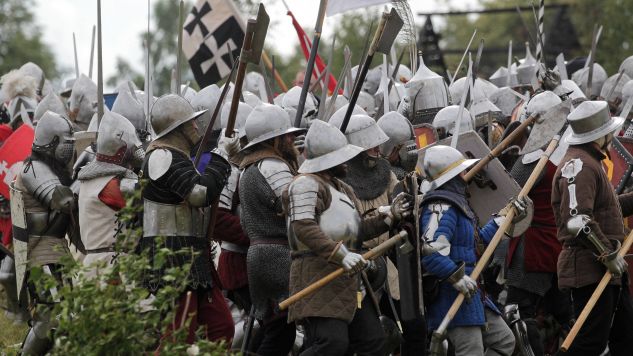 Each year, thousand knights descend on the fields of Grunwald to come together in the reenactment of the historic battle between joint forces of Poland and Lithuania against the Teutonic Order.Photo: PAP/Tomasz Witaszek

New Battle of Grunwald museum to open by 2020

The defeat of the monastic Teutonic state, originally established by crusader knights brought in to spread Christianity among the pagans inhabiting the area along the Baltic shore, allowed the Polish-Lithuanian alliance to flourish, eventually leading to the rise of the regional superpower known as the Polish-Lithuanian Commonwealth.

The annual reenactment of the medieval battle is the biggest of its kind in Poland and one of the biggest in Europe.

The re-enactors arrive a few days before the battle and live in a camp built on the spot. For a few days, they live as people did in medieval times. They don’t use modern inventions, they dress in historical clothes and eat according to the diet of the time.