Poles all over the country stopped for a moment at 5pm CEST to mark the 76th anniversary of the outbreak of the Warsaw Rising. Drivers sounded their cars’ horns and signal sirens whined in order to commemorate the insurgents.

Every year, one of the largest gatherings in Poland occurs around Roman Dmowski roundabout, in the very centre of Warsaw. Despite the SARS-CoV-2 coronavirus pandemic, thousands of Warsaw’s citizens also gathered there this year. Punctually at 5pm, when the sirens sounded, many people lit flares, and shouted: “Honour and glory to the heroes!”

Many local gatherings also took place in Warsaw. At major intersections, squares, and roundabouts, as well as at many monuments, in all districts of Poland’s capital, the observances were organised by patriotic associations, sports fans, scouts, and veterans. There was also a commemoration on the Vistula River, dozens of vessels with people with flares were on the river.

But sirens can be heard not only in Warsaw. Traditionally, they are sounded in many Polish cities, which also want to commemorate the heroes of the Rising.

The central observances took place at the Gloria Victis (“Glory to the defeated”) monument at the Powązki Military Cemetery in Warsaw.

“We did not come to this cemetery to weep. Here, on this sacred ground where the remains of sons and daughters of the invincible city are laid, we want to wipe our tears. We want to sing a song of gratitude to the Lord for those who sacrificed their health and lives on the homeland altar,” Brigadier General Józef Gózdek, the field bishop of the Polish Army said at the observances.

The highest authorities, including the President Andrzej Duda, the Prime Minister Mateusz Morawiecki, speakers of the Sejm and Senat (lower and upper houses of the parliament) Elżbieta Witek and Tomasz Grodzki, deputy Sejm speakers Małgorzata Kidawa-Błońska and Włodzimierz Czarzasty, the Mayor of Warsaw Rafał Trzaskowski, Defence Minister Mariusz Błaszczak, the leader of the ruling party Jarosław Kaczyński as well as veterans and Warsaw citizens paid their respects at 5pm to the insurgents that stood up against the Nazi German occupation. 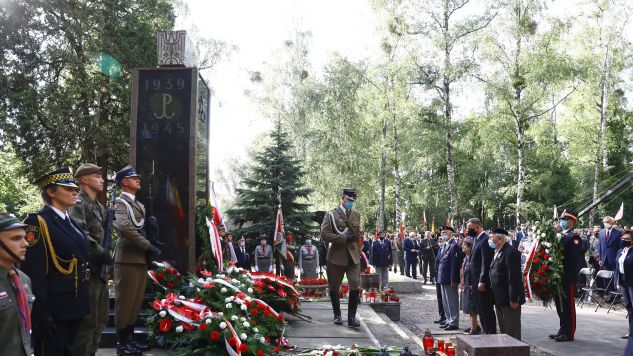 We have no right to judge decision about Warsaw Rising without context: PM

The uprising began at 5pm (the “W” hour) on August 1, 1944, in an attempt to liberate the city from German hands as the Soviet Army began their offensive in German-occupied territory which is now central-eastern Poland.

The goal of the underground resistance organisations was to liberate Warsaw before the Soviet Union entered the capital.

However, real help from the Soviet Army never came. The “ally” stood on the eastern riverbank of the Vistula River and watched the capital city engulfed in blood and fire. After 63 days of fighting, running low on ammunition and food supplies, the uprising ended in the insurgents’ surrender on October 3.

In the end, around 200,000 insurgents and civilians lost their lives, and by the time the German forces withdrew from Warsaw in January 1945, around 85 percent of the city’s infrastructure had been completely levelled and barely six percent of Warsaw’s pre-war population still remained in the city.