Poland’s GDP slumped 8.2 percent in the second quarter of 2020, according to Statistics Poland estimates, as the COVID-19 lockdown took its toll, but not as badly as had been expected, PolandIN’s Business Correspondent says.

“An 8.2 percent recession does not seem like good news. However, compared to the NBP forecast of a 10.6 percent slump and the recession figures for Euroland and the UK, Poland has not done so badly,” PolandIN’s business correspondent David Kennedy commented on Friday’s GDP figures. 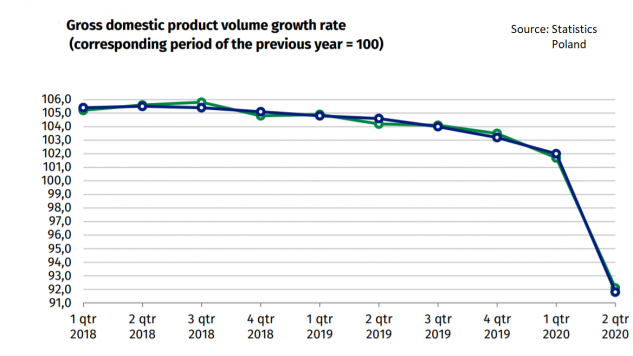 “The biggest trough in GDP was no doubt in April,” according to ING Bank Sląski economists in their note. We can imagine that the fall in consumption at that time was in double figures.

However, it appears that business got going again in May and June, with services being less affected than had been imagined.

The government’s lockdown stimulus “has certainly contributed” to the better than expected GDP figures, David Kennedy said, although he voiced concern about COVID-19’s effect on the economy going forward, as the pandemic “does not appear to be going away.”

The figures released are an estimate and full details about the effect of the coronavirus on growth in Q2 will only be available in a few weeks.