Marta Lempart, the leader of the “Women’s Strike” movement which is leading the protests against the tightening of Poland’s abortion regulations says that the protests taking place in dozens of Polish cities are a “revolution” that could lead to the fall of the government.

Monday witnessed the fifth day in a row of protests in dozens of Polish towns and cities. In some places demonstrators clashed with police and with those guarding church properties. On Sunday many churches suffered slogans being graffitied onto their facades and there were instances of demonstrators bursting into churches and disrupting mass.

The protests are against the constitution court’s ruling which makes abortion possible only in cases of a pregnancy being the result of rape, incest or when the mother’s life is in danger. The court ruled that a clause in teh 1993 Family Planning Act which allowed abortion in cases of likely seere disability or lethal defects to the fetus, was unconstitutional as it interfered with the right to life which is guaranteed by the Polish constitution and which the court deems to begin at conception rather than at birth.

The ruling, which had been sought by MPs from the ruling Law and Justice (PiS) block and the radical right “Confederation” has provoked a storm of protests from the left and from the women's movement. The liberal Civic Platform (PO) is also backing the protests and arguing that the court’s ruling is invalid as it contests the fact that three of the judges who took part in the proceedings were not, according to the PO, validly elected back in 2015.

The Catholic Church and the pro-life groups which campaigned for further restrictions in the abortion regulations are now being targeted by demonstrators. The Church is being accused of interfering in politics. The ruling PiS is in turn being criticized for doing the church’s bidding. 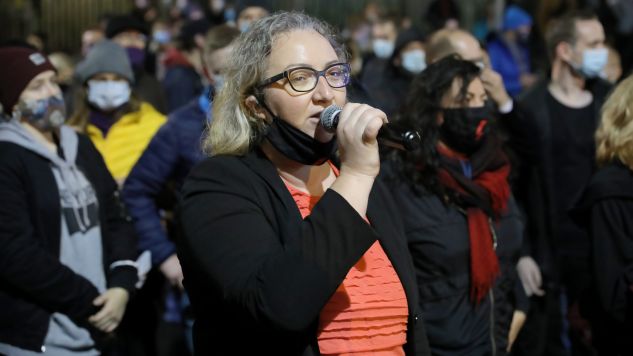 Marta Lempart on the barricades

In an interview for portal Onet.pl published on Monday Marta Lempart, the leader of the “Women’s Strike” movement which is coordinating the protests against the constitutional court’s ruling, admitted that the protests are not just about abortion. “It is a struggle for freedom which has brutally been taken away, abortion is just a symbol of that” she said and called the protests a “revolution”.

She made no apologies for the vulgar language being used by the demonstrators against the government and the Church. She also had no plans to advise the government on what it should do to remedy the situation. Ms Lempart told the government it should “f*** off with tightening the abortion law and with all the other things they have done for the last five years.”

Marta Lempart told Onet.pl that the movement planned for a women’s strike on Wednesday, further street demonstrations and a massive demonstration in Warsaw on Friday. She hoped that trades unionists would join the strike to voice their grievances over the handling of the pandemic.

She argues that PiS have been surprised by the scale of the protests. She said that the movement was ready should the government introduce a lockdown or state of emergency. The nature of the protests would then change, but they would continue.

The women’s movement leader said that she was demanding that the government “admit that the constitutional court is a fraud as it includes judges who have no right to be there.” But she also admitted that for the government to back down on abortion would only be the beginning. “The revolution which has begun is not just about abortion. Its a struggle for freedon which has brutally been taken from us, and abortion is just a symbol”. She added that the movement was ready for potential repression from the authorities if the government does not back down but expected a strong reaction to such actions from society.

Ms Lempart revealed that her organization will appeal to doctors to ignore the ruling by the constitutional court and to continue to offer abortions when there is potential for the child to be severely disabled. This option would be closed if Parliament changes the actual family planning law.

At the weekend a part of the ruling block, the centre-right “Agreement” party led by Deputy PM Jarosław Gowin and some PiS MPs proposed that the family planning law be amended so as to allow abortion in cases of lethal damage to the fetus , but not in cases of disability , such as Down syndrome. However, this would still mean that the abortion regulations are to tighten, even when compared to the already restrictive abortion law operating in Poland.

Marta Lempart also felt that women could take the matter up in the international courts arguing that their human rights are being violated. She regards attempts at forcing women to give birth to disabled children as “torture”. The activist also reminded that her movement would continue to help women with getting abortions abroad.

Bringing down the government is a dream

The “Women’s Strike” leader feels that the political consequences of the protests could be the fall of the government. At the very least she feels that the next parliamentary majority will “legalize abortion, bring in marriage equality and many other things”. She dreamt of a “secular state with human rights and freedom for all. All this may happen later, though it would be better if it happened now.”

The radical language she is using and the clear pitch for those who are fed up with the pandemic and its effects are attempts to broaden the movement and to concentrate on discontent. However, those who are protesting against pandemic restrictions are often those on the radical right who have little sympathy with left-wing gender causes. Unity among all protesters is an ambitious but probably unrealistic goal.

It is also hard to expect the government to fold. Saying that she and her movement want to bring down the government endangers the protesters of being seen as political opportunists. PiS still enjoys strong support across the country and even if many of its voters have doubts about the constitutional court’s decision, they may not look kindly on attempts to force the party they have just voted for in parliamentary and presidential elections out of office.

Poland is not Belarus or Ukraine

If the protests gwo and the pandemic does not abate the government may be pushed into a state of emergency. And it may also in the next few days face attempts by the demonstrators to take control of public buildings and/or stage a Maidan style protest in the centre of Warsaw. Some are excitedly pointing to Belarus and saying that the scale of demonstrations could reach those being seen there.

However, Poland is not Belarus. A presidential election was held freely and daily in Poland and the PiS candidate won it. The cry for the government to leave therefore lacks democratic legitimacy. Polish police are far more restrained in the way they deal with demonstrators than the Belarusian or French police forces.

Nor is Poland like Ukraine. There were three catalysts that led to the Maidan. The first was the decision by the then Ukrianian authorities to abandon an association agreement with the EU. The second was people’s growing anger with corruption. The third was the fact that some influential and rich oligarchs fell out with the government and backed the protests with resources and muscle.

In Poland people are worried over the pandemic and frustrated over restrictions hitting their businesses. But large parts of the population have benefitted from the PiS government’s social policies and companies did receive support from the state when the first wave of the pandemic hit. Issues such as LGBT and abortion rights are issues of personal freedom that demonstrate a growing generation gap in attitudes.

Could this then be Poland’s 1968 moment? The events in France and elsewhere in that year were a cultural revolution rather than a directly political one. In purely political terms they led to a backlash that in France saw a landslide win for the right. However, deep cultural changes over the next decades did flow from the events of 1968 and the radical movements it unleashed. .

However, there is nothing original or really revolutionary about the aborition or LGBT disputes in Poland. They mirror closely fights over abortion and LGBT rights that have taken place in western societies over the years. The clash is between those who want to imitate the west in placing emphasis on freedom of the individual and looking towards a society in which traditional family, religion and the nation are replaced by different kinds of social ties, globalism and progreessive materialism, and those who want to build a society based on communitarian , Christian and national identity.