Jarosław Kaczyński, the leader of the ruling Law and Justice (PiS) party and a deputy Prime Minister accused politicians from the opposition of “having blood on their hands” due to their support for protests during the COVID-19 pandemic and added that “if there is rule-of-law in Poland,” many of them “will end up in jail.”

Analysis: pandemic and abortion double whammy for govt and opposition

Wednesday evening was another day of protests in Warsaw against the decision of the Constitutional Court (TK) tightening abortion rights. However, many participants of the protests are also against the ruling party’s policies in general.

The protesters gathered at first near the premises of the Polish parliament but then decided to march to Warsaw Insurgents’ Square also in the city centre, where one of the buildings of the public broadcaster TVP is located.

There were some violent incidents during the protest, according to reports, the police used tear gas, stun grenades and telescopic batons.

Analysis: an anti-conservative rebellion by women, youth and liberals

Monika Wielichowska, an MP of the opposition Civic Coalition (KO) reported in the Sejm that a police officer infringed her inviolability and damaged her ID when she intervened during the protest.

“You have set fire to emotions in the middle of the pandemic. What have you done today with Warsaw? The Sejm is one big stronghold. You should walk out and say what are you doing!” she addressed the leader of PiS.

Although Elżbieta Witek, the speaker of the Sejm announced a break, Mr Kaczyński entered the lectern and responded.

“All those manifestations you have supported have claimed the lives of many people. You have blood on your hands. You violated article 165 [of the penal code, concerning liability for epidemiologic threat among others – ed.]. I repeat you should not be in this chamber. You have committed a crime!” Mr Kaczyński said and left the lectern.

Politicians from KO announced that they will submit a motion for a vote of non-confidence in the deputy PM Kaczyński. 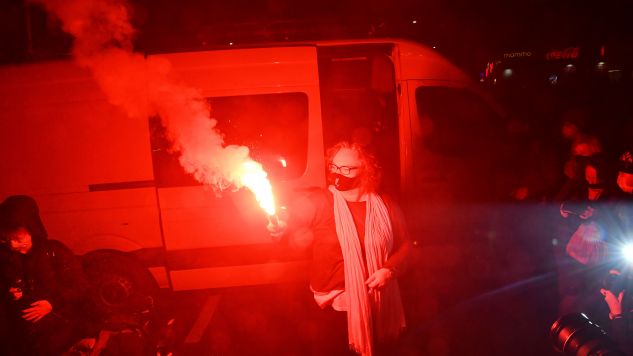 Deputy speaker claims he was beaten up

Włodzimierz Czarzasty of the Left, a deputy Speaker for the Sejm, accused police officers of beating him up. “There was a moment when I was apprehended, pushed to a car’s bonnet and hit in the back. I was immobilised by force and deprived of freedom,” he said. After a while, as he reported, Sejm security personnel arrived and informed the police that he was an MP, and the officers released him.

The Police claim that it was Mr Czarzasty who was aggressive and pushed an officer. “A recording shows an incident with a deputy speaker of the Sejm. In the 8th second [of the recording], a police officer was pushed. He was seriously hurt in the leg, required medical assistance and a cast,” the Warsaw police wrote on social media.

“The recording... clearly shows that the deputy speaker was neither beaten nor apprehended. MP [Anna Maria] Żukowska showed her ID and easily walked to the Sejm, a second MP was also allowed to pass. Mr Czarzasty did not show his ID and was halted by the police,” Ms Witek commented.

Media and opposition politicians reported on Wednesday evening that some police officers were in the crowd undercover without uniforms and detained people.

“I witnessed some brutal apprehensions. The police dragged out a person from the crowd and others tried to ‘liberate’ the detainee. A brawl started and began to be dangerous, as officers used batons,” a journalist of Onet news website reported. Reportedly, some people were frightened that the masked police officers were nationalists trying to provoke them.

“There were no irregularities, we cannot say that police acted in an improper way,” Sylwester Marczak of Warsaw police said on Thursday.

“We will use tear gas where it is necessary, this is one of the measures used by the police to restore order,” he added.