Poland’s Kamil Stoch won the 69th Four Hills Tournament after an outstanding performance in the competition held in Bischofshofen, Austria. This...

The trial round confirmed the good form of the Poles. Kamil Stoch was the runner-up behind Norway’s Robert Johanson, Aleksander Zniszczoł was 8th and Kubacki finished 11th.

First round: Five Poles in TOP10

Stękała began the contest in Titisee-Neustadt with an outstanding attempt. He flew 143.5m in his first jump. Piotr Żyła also recorded a very good attempt and outran him for 0.9 points after a 143m-long-jump.

Kubacki, who flew just after Żyła, also wanted to confirm his good performance. He flew 143m and gained the lead.

Stoch flew 139m and after his attempt, four Poles were in the TOP4, as he was classified second thanks to a very high rating for style.

Finally, Kubacki won the first round, ahead of Stoch, Norwegian Halvor Egner Granerud, Żyła and Stękała.

Jakub Wolny was 10th after the first attempt and Paweł Wąsek – 26th. Aleksander Zniszczoł failed to qualify to the second round as he finished the first round in 36th place. 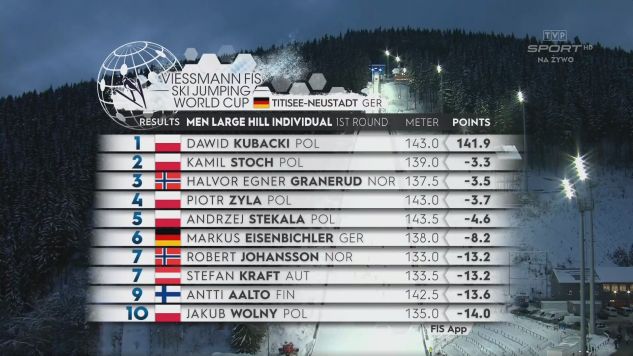 Results after the first round. Photo: TVP Sport

This was a Polish day in Titisee-Neustadt and the second round of the contest only confirmed it.

Stoch flew 144m which was the longest jump in the event and won the contest (Norwegian Johann André Forfang also flew this far on Saturday). This was his 39th triumph in the Ski Jumping World Cup, which means he has the same number of victories as legendary Adam Małysz.

Granerud finished second after a very good attempt in the second round, he flew 138.5m. Żyła struggled for the distance to the end and flew 139.5m which gave him third position in the competition.

Stękała flew 134m and finished the contest in 5th place, which is his best result in his career. Kubacki flew only 128m and dropped to seventh place. However, he had worse wind conditions than other top jumpers.

Wolny flew 133m and finished the contest in 11th place whilst Wąsek did not improve his position and was classified in 28th position.

On Sunday, the jumpers will compete again in Titisee-Neustadt.
source: Poland IN
Comments