On March 25, Poland drew 3:3 against Hungary in the Puskás Arena in Budapest. The away match was the debut of Portuguese coach Paulo Sousa and Poland’s inauguration in the FIFA World Cup 2022 qualifiers.

Leeds United Midfielder, Mateusz Klich, who had been rumoured to be in the starting 11, did not make an appearance due to his COVID-19 infection. Although, Barnsley defender Michał Helik made his debut in the national colours.

The flag also mentions the 1921 football match between Poland and Hungary. On December 18 1921 they played one another and although Hungary won the game, it helped Poland establish its National Football team after regaining independence. It was a historical moment for Poland, because for the first time ever, players appeared on the field wearing shirts emblazoned with the white eagle of Poland. 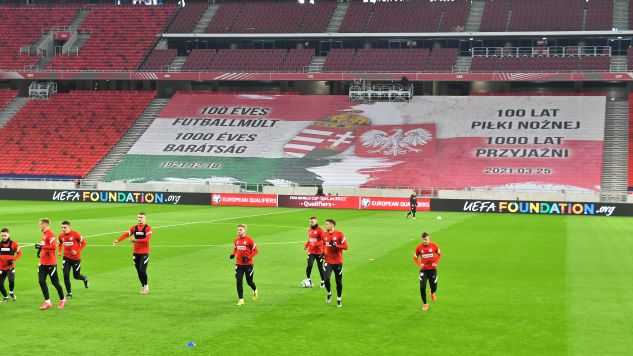 Hertha Berlin striker Krzysztof Piątek and Derby County midfielder Kamil Jóźwiak, who both came onto the field just moments before, scored the goals to bring the teams level at 2:2 in the 60th and 61st minute respectively.

RB Leipzig Willi Orbán’s goal enabled Hungary to regain the lead in the 78th minute. However, in the 82nd minute, captain Robert Lewandowski evened the game at 3:3.

Right-back Attila Fiola received a red card in the 93rd minute after being booked twice.