Dr Łukasz Jasina from the Polish Institute of International Affairs (PISM) told Poland IN that “Belarus is now a danger to international safety… we have no idea what to do with a state in the centre of Europe behaving like that.”

The conversation with Dr Jasina comes in the wake and touches upon, among others, the murder of Vitaly Shishov, the head of Belarusian House in Ukraine (BHU), which is a group helping people who left Belarus for fear of being persecuted for their engagement in civilian dissent against the rigged elections of August 9, 2020.

On Tuesday, Mr Shishov was found hanged in a park in Kyiv, just a day after he went missing following an outing for a jog. Having opened a murder inquiry, the Ukrainian police said they were investigating whether he had been killed and his death made orchestrated to resemble a suicide.

Mr Jasina expressed no surprise over a potential investigation result pointing to Lukashenko’s regime as the string-puller behind the murder. “Situations like that had a place in Kyiv, where it is easy for Belarusian killers to behave like that. It is not a shocking idea that Alexander Lukashenko gave an order to execute his enemies abroad,” he said, adding that “there were a few situations like that in Kyiv and in Western Europe in the last ten years.”

What is important to Mr Jasina is that “Mr Lukashenko is behaving like that on the eve of his crisis, on the eve of the international sanctions… He behaves as if he does not care and continues his bloody politics.”

Commenting on the story of Belarusian sprinter Krystsina Tsimanouskaya had received a humanitarian visa from the Polish Embassy in Japan lest she is persecuted for the criticism of her superiors’ decisions concerning her participation and that of her colleagues in the Tokyo Olympics, Mr Jasina said this has been the first such defection of a Belarusian sportsperson in many years. 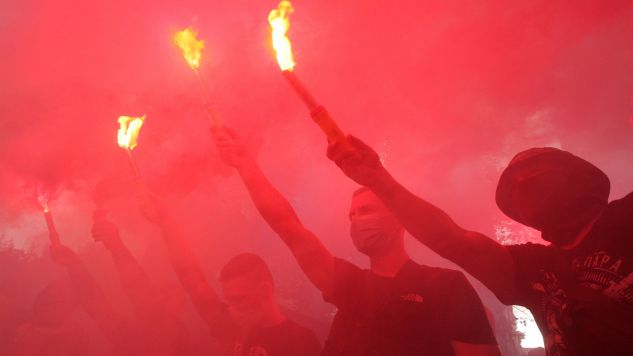 Most important thing is Tsimanouskaya was not taken back to Belarus: Dep FM

How the violence started

The ignominious list of use of violence by the regime of Europe’s last dictator Alexander Lukashenko is long. On top of it the detentions of opposition figures and clampdowns on peaceful citizen protests frustrated with what started playing out as the same old story rehashed – yet another year of Mr Lukashenko behind the governmental steering wheel, in fact, the sixth tenure in a row since 1994.

The dictator’s rival to the presidential seat Sviatlana Tsikhanouskaya claimed to have won a decisive first-round victory with at least 60% of the vote and called on Lukashenko to start negotiations. Despite forming the Coordination Council to facilitate a transfer of power and announcing readiness to organize "long-term protests" against the official results, 84.17 percent for the former director of the Gorodets state farm ditto sovkhoz gone-politician, hollered by the Lukashenko-controlled Central Election Commission on August 9, all seven members of the Coordination Council Presidium were arrested or went into exile. Before delving into details, it deserves a reminder that putting persecuting individuals for organising electoral boards, taking part in elections and objecting to results of dubiously fair elections is a form of violence, especially when detention, harassment and mental abuse are employed top-down by the state, all of which are based on the asymmetry of power.

Two days later Ms Kolesnikova was detained by unidentified masked men in Minsk. As of September 9, the only member of the praesidium not yet arrested or missing has been laureate of the Nobel Prize in Literature, Svetlana Alexievich and that in large part thanks to the round-the-clock guard she was put under on August 9, 2020, by diplomats from several European countries including ambassadors of Poland and Lithuania. In late September 2020, Ms Alexievich travelled to Germany.

At a press conference in Poland, council member Pavel Latushko condemned the situation in Belarus, claiming that 10,000 people were subject to misconduct and imprisonment orchestrated by the security forces. He stated that 450 people were tortured, and protesters were put into jail on fake charges. 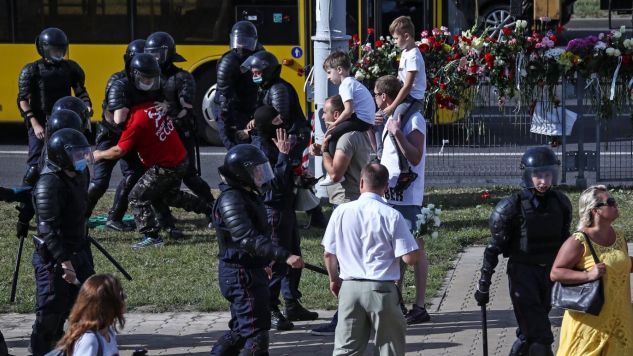 The August 2020 protests were expression of a citizen opposition to the rigged presidential elections. Photo: PAP arch.

With the official election results out on the night of August 9, 2020 disgruntled citizens started taking to the streets of Minsk on the very same day. “Everyone was on their knees, they kept on cramming people into the bus. And then the violence started. The riot police officer said that we had to get up as fast as we could, grab our things and leave the bus. And they started beating people until they stood up. One of them would hold someone while the other beat them. They were just beating and saying: ‘What did you want, b****, change?’,” is how a Minsk resident, cited by Open Democracy, describes his arrest on August 9.

Two days later the protests continued in the major cities of Belarus, including Brest, Homel, Hrodna, Mahiliou, Viciebsk, Baranavichy, Maladzyechna, Navahrudak, Navapolatsk and Zhodzina throughout the evening. In Minsk, protesters erected barricades around the Riga Market in the centre of Minsk. This was met with government forces’ brutal response marked by tear-gassing, throwing stun grenades and firing rubber bullets at the protesters at close to point-blank range. This is probably when the regime’s response reaped its first victim — a protester, Alyaksandr Taraikousky, who died from a rubber bullet shot to the chest despite the fact he was holding his hands in the air. Mr Taraikousky was killed near the Pushkinskaya metro station in Minsk.

In August and September 2020 alone, according to Russian media outlet Mediazona who received a data archive held by Belarus’ Investigative Committee from an anonymous source, the minimum number of people injured by Belarusian police during protests was 1,373. Open Democracy analysed that data and concluded that the average age of an injured person coming to 31, young men were most likely to be injured at the protests and that the worst injuries came from rubber bullets and flash grenades.

“Judging by injuries caused by rubber bullets (40 cases), it is clear that police officers often shot people in the head, chest and stomach when dispersing protests - and these weapons caused the most serious injuries,” Open Democracy wrote.

Firing rubber, Belarusian riot police were also aiming for the head. This sent a 40-year-old man to a hospital with “closed head trauma, concussion, multiple gunshot injuries to the right jaw” injuries to his rib cage, stomach and left thigh. Another protester, 29, had his maxillary sinus penetrated by a rubber bullet and his nose fractured. Instances of losing eyeballs from rubber bullets were noted. 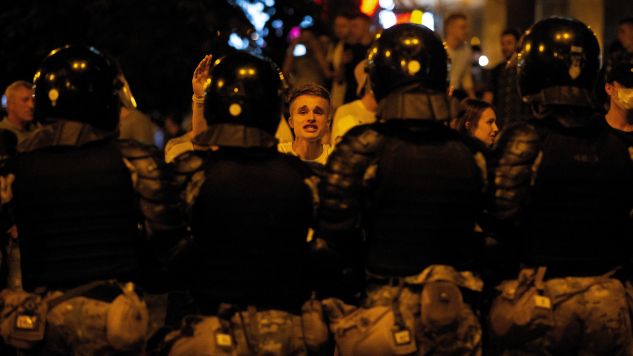 Flash grenades were also generously used causing no less serious injuries than rubber bullets. As reported by Open Democracy, a 30-year-old man had his right foot removed by a flash grenade bang. Other protesters declared hand and foot fingers broken and bones shattered into multiple pieces by flash grenades. A flash grenade also fractured a vertebra in a 33-year-old man’s lower back, another man took a fragment of a flash grenade to his chest, leading to pneumothorax.

“On August 10, I was coming home around 11 pm with some friends. I heard some explosions, but I did not have internet access on my phone, and I did not understand what was going on. Suddenly I saw the police. They were around 100 metres from me. As far as I could tell, the protesters were near the Ice palace [an indoor sporting arena in Minsk], but there was no one really near me. I could not have predicted that a flash grenade would fly into this empty space,” recounts Heorhiy Saikousky, a Minsk resident who lost a foot to a flash grenade.

Some of those who avoided injuries during protests were taken into police vans, police stations and detention centres in Akrestsina and Zhodzina, where they were beaten in a situation of vulnerability and lack of resistance towards the police. The beatings were delivered during detention, then in the police van or station, and then in the detention centre. As Open Democracy reported, “in many cases, this torture went on for several days... After being beaten at the Akrestsina detention centre and police stations, detainees were released with head traumas and bruising to their spine, abdomen, shoulders, buttocks and thighs. Around 200 people received head traumas and concussions. Some detainees were placed face-down on the floor or with their faces against the wall, and were then beaten with riot sticks. On October 11, the NEXTA Telegram channel published a video showing how detainees were forced through a column of police officers, who beat them as they went.”

The findings of Mediazona, and per extension Open Democracy, overlap with the UN Human Rights Office statement of September 1 in which more than 450 documented cases of torture and ill-treatment of detainees, as well as reports of sexual abuse and rape, were cited. At the end of 2020, the Viasna Human Rights centre documented 1,000 testimonies of torture victims.