Ten Polish Unis among the best in the world

There are ten Polish facilities among the 1,000 best universities in the world according to the Academic Ranking of World Universities (ARWU). The highest ranked: the University of Warsaw and the Jagiellonian University, were placed in the fifth hundred.

Academic Ranking of World Universities, also known as the Shanghai List, has been published since 2003 by the Jiao Tong University in Shanghai. On the list published in 2020, there were eight Polish universities.

This year, there is a status quo on front positions. Harvard retained the title of the best university in the world. Stanford came second, while the British University of Cambridge ranked third. The top 10 includes 8 American and two British institutions.

The exact position in the ranking is known only in the case of the top 100 universities in the world. The others are mentioned only approximately, as lower-ranked facilities are listed in groups of 50 or 100 institutions. 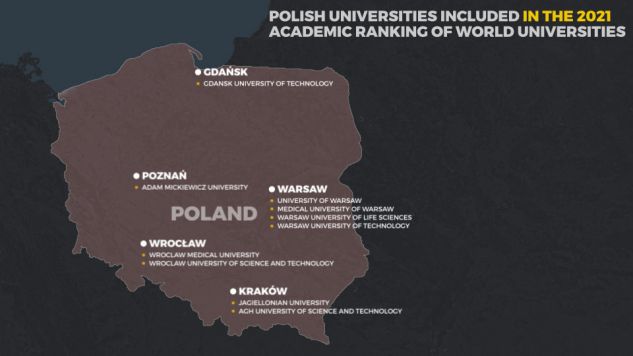 Polish facilities that made it to the Academic Ranking of World Universities. Photo: PolandIN

The best universities in Poland according to the Shanghai List are the University of Warsaw and the Jagiellonian University (which are in the fifth hundred - ranked between 401-500).

The AGH University of Science and Technology in Kraków and the Medical University of Warsaw were classified in the eight hundred of the ranking.

In turn, the Gdańsk University of Technology, the Silesian Piasts Medical University in Wrocław and the Warsaw University of Life Sciences found themselves in the ninth hundred.

The Shanghai Ranking is based on several indicators, among which are the number of graduates and employees who received the Nobel Prize and the Fields Medal, the number of publications in the journals "Nature" and "Science", the researchers who were cited most often and the scale of the achievements in relation to the size of the university.