82 years ago, on August 23, 1939, the Minister of Foreign Affairs of the Nazi German Third Reich, Joachim von Ribbentrop, and the People’s Commissar for Foreign Affairs of the USSR, Vyacheslav Molotov, signed the Soviet-German non-aggression pact with a secret additional protocol, the consequence of which was the Fourth Partition of Poland.

The secret additional protocol consisted of four points in which both parties divided different European countries between themselves and was treated as top secret protocol.

“The Ribbentrop-Molotov Pact is often called the 4th partition of Poland. This name reflects its essence well. Two neighbouring countries concluded an agreement concerning the division of Poland’s territory among themselves. After a few weeks, this agreement was realised,” Professor Andrzej Garlicki stressed. 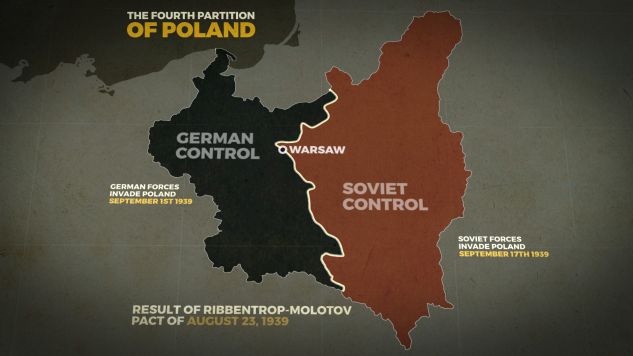 According to German historian, Professor Klaus Zernack, the author of the book “Poland and Russia”, after signing the agreement with the USSR “Hitler could be glad that he had all his opponents in his pocket, present and future, in the West and East. He owed it to the favourable attitude of Stalin, who (...) probably was closer to peace with Germany, in addition to the tempting gains in Poland, than to European security”.

The date of celebrating the European Day of Remembrance for the Victims of Totalitarian Regimes is not accidental – on 23 August 1939, the #MolotovRibbentrop pact was signed that determined the outbreak of #WW2, which was the next partition of the Polish land. @enrs_eu pic.twitter.com/ilAAvFgFO3

The leaders of France, the UK and the US knew almost from the beginning about the secret protocol of the Molotov-Ribbentrop Pact. However, they did not pass this information on to the representatives of the Polish authorities.

“On this day, we pay tribute to those who fell victim to totalitarian regimes in Europe and those who fought against such regimes. We recognise the suffering of all the victims and their families, as well as the lasting effect that this traumatic experience left on the following generations of Europeans,” EC deputy head for Values and Transparency, Věra Jourová, and Commissioner for Justice, Didier Reynders, wrote in a statement on August 20, referring to the European Day of Remembrance for the Victims of Stalinism and Nazism, established in 2008 by the European Parliament.

Ahead of August 23rd, let me remember brave victims and fighters against totalitarian regimes in Europe.

Freedom from totalitarianism and authoritarianism is not a given. We need to stand up for it together with respecting #RuleOfLaw and democracy.