Poland won 4:1 against Albania in the 2022 FIFA World Cup Qualifiers match in Warsaw on Thursday, jumping to second place in their group.

Prior to the first whistle, coach Paulo Sousa stated that it was the score that mattered most in the qualifiers, not style. That doctrine proved to be true, as Poland played counter-attacking football despite being the hosts of the match.

Talismanic captain Lewandowski opened the scoring in the 12th minute with a close-range header, but Albania equalised 13 minutes later when a long pass from Klaus Gjasula found striker Sokol Cikalleshi and he put the ball past Wojciech Szczęsny.

Poland regained the lead against the run of play just before halftime through a header from New England Revolution’s forward Adam Buksa, who scored on his debut in the national colours.

Nine minutes into the second half, Grzegorz Krychowiak tapped in a pass from Lewandowski, after the Bayern Munich striker had dribbled past three Albania players.

Just before the final whistle, Karol Linetty fired the ball in off the crossbar to secure a convincing, at least on paper, win for Poland.

The victory, only the second one under Paulo Sousa since he took charge in January, sent Poland to second place in Group I after four games alongside Hungary on seven points, five behind leaders England.

The Polish team will now face San Marino in an away game on September 5, to take on England three days later at home. 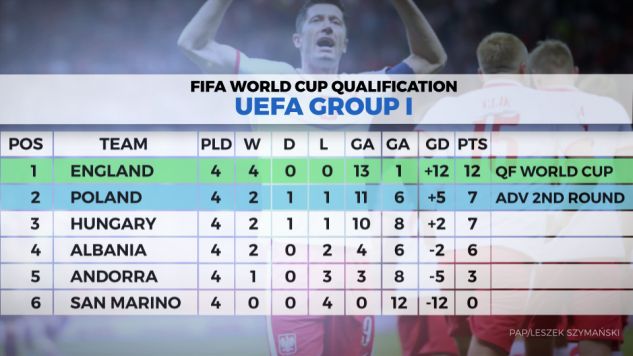