Poland defeated Albania 1:0 in Tirana in the FIFA World Cup qualifier, which put the team closer to the qualifying playoff spot. The match was suspended due to the home fans’ misbehaviour after Karol Świderski scored the only goal of the night.

Before the match, Albania were second in Group I on 15 points, one ahead of Poland. Had they beaten the visitors, they would have been almost certain of advancing to the playoff stage of the qualifiers.

The hosts had the first decent chance in the 9th minute after an error by Grzegorz Krychowiak, but the Polish midfielder redeemed himself shortly afterwards.

Poland replied five minutes later when they had a series of set pieces near the Albanian penalty box, but they failed to have a shot on target.

During this particular phase, the visitors played in a chaotic manner, often giving the ball away in midfield. The match was very tight with many fouls committed by both sides, who could not create any clear goal opportunities in the first half.

The match played out in similar fashion in the second half, when none of the teams were able to impose their style on one another. Insteady, both Poland and Albania tried sending long balls to their forwards, but with poor results. With time, the visitors became more dangerous in the buildup phase and coach Paulo Sousa sent on two in-form players: Karol Świderski and Przemysław Frankowski to gain leverage over the fatigued Albanian defenders.

Once again, the Portuguese manager showed his instinct for substitutions. In the 77th minute, six minutes after coming off the bench, Świderski put Poland in the lead after a cross made by another substitute, Mateusz Klich. When celebrating his goal, the Albanian fans threw various objects, including plastic bottles, at the Polish players, who came off the pitch and went to the dressing room. The officials waited for the atmosphere in the stands to cool down and, after an additional warm-up, the referee finally resumed the match. The hosts were visibly knocked out of their rhythm and did not pose a real threat to Wojciech Szczęsny’s goal.

All in all, the visitors achieved a priceless victory. After eight matches played, Poland have now overtaken Albania and are second on 17 points. The leader’s are England on 20, who surprisingly drew 1:1 with Hungary.

In November, the Polish team will travel to Andorra and conclude their qualifiers against Hungary at home. 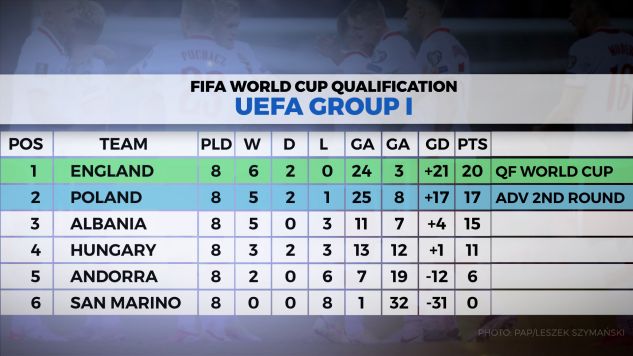